For those of you who don’t know, last week was my first week at USAID. Day One was long and tedious and included my official swearing in as a Foreign Service Officer by the Chief Operating Officer of USAID. My class of Development Leadership Initiative (DLI) is class 13. The DLI program was a way for USAID to quickly restaff the Foreign Service with new blood. Our class has 36 members from various backstops (job titles). There are several Agriculture Officers, Crisis & Stabilization Officers, Program Officers, and Health Officers. Additionally, there are 3 other Economists in the group. The picture below is of our DLI 13 class following our swearing in. 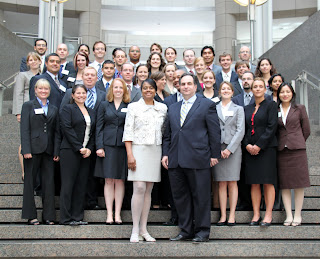 For the past week, we were briefed on so many different topics my head may explode. Early in the week it was primarily health insurance, retirement etc. This was a lot of drama, because unfortunately, there are a lot of things into take into consideration, especially since there will be a long period of time where Andrew will be unemployed.
Later in the week, we actually got briefed on a lot of important aspects of our future jobs, the makeup of USAID, the next training rotations (including language training) and talks from Bureau heads. One important thing that was laid out this week was that NONE of us will be posted in Critical Priority Countries. So no Iraq, Afghanistan, Pakistan or Sudan, which is good news, because Andrew will definitely be joining me on our first posting. The briefings from the bureau heads were truly enlightening; the head of Middle East spoke for 5 minutes on the importance of Economists in the field. That was nice to hear after a week of attempting to explain to my training mates the usefulness of economists.
Next week I turn in the form that outlines my “preferences” for the next posting. Four more weeks until we find out! I will try to write more. Additionally, please feel free to post any more questions, since I am significantly more informed now.
To answer Dan's question regarding language training, I am estimating I will start one month following the end of the DLI training. The last day of DLI training is the Friday before labor day. The actual language will of course depend on the country of post and the start time at the Foreign Service Institute (where I will take courses) will depend on their schedule.
After one week of training, I truly miss our week in Key West! 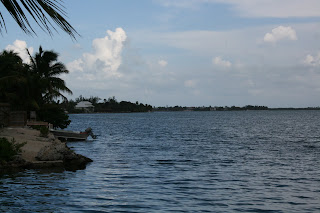 1:12 AM
Whitney Dubinsky
Email ThisBlogThis!Share to TwitterShare to Facebook