I know Andrew posted the results below, but I figured I would give our "avid readers" the dramatic version of our first post assignment. My family and I were arrived at the flag ceremony at 10:30. Prior to the ceremony, the DLI 13 class was given there facebooks (actual books not internet web phenomena) and given a briefing of how the ceremony would go. Ahead of time, we were told three of us would be receiving American flags. Essentially this means either you are a contract officer or you have not been posted yet. I feel badly for the people who were not posted yet, especially if there family traveled all the way for the ceremony.

After everyone started filtering in, the DLI HR representative brought out a table full of flags. 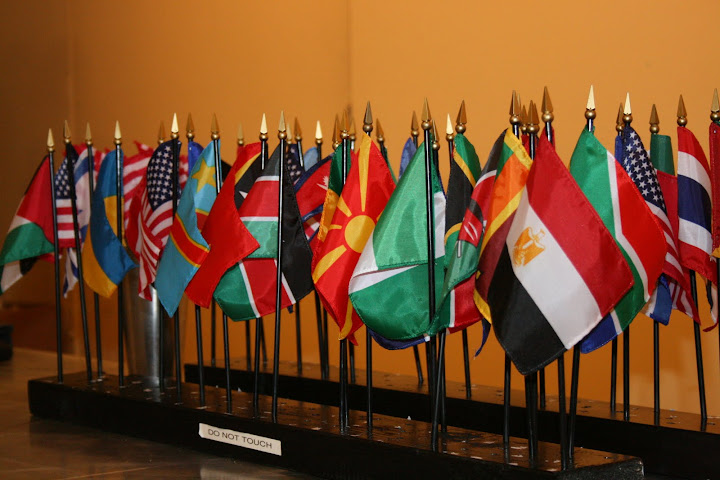 Now, normally the ceremony would have started right after those flags arrived, however, our keynote speaker was late. This caused an insane group around the flags and a mass "try to figure out what country they were." There were a lot of rumors circulating. For instance, there were 5 american flags, unlike the announced 3. Additionally, people were saying there were 5 Kenyan flags. People identified Lebanese flags and three from the DRC. I avoided the table for two reasons. One, I didn't need the stress of trying to figure out which was mine (I was stressed enough). And two, I don't know any flags. I was easily able to identify an Israeli flag and a Mexican flag. Go me! Lol. I attempted to prep my family by telling them that there were 2 DRC flags, and that would be us. I texted Andrew that too.

Our keynote speaker arrived, Administrator Shah. For those of you not involved with USAID, that is the head of the agency. He spoke about the effect we will have and how he has high faith in the new life in the foreign service. Granted he could have been talking about ice cream and pie and I wouldn't have noticed. I was stressing by this point. My father said I was awkwardly laughing. I have no recollection.

Then came the flag ceremony. The DLI coordinator read each of our names and then the country we would be working in. Row one stood up and my heart attack began. I remembered what I kept telling myself, start smiling BIG two people ahead of me and DO NOT stop until you sit down. It would be awful to yell "Shit" in front of the Administrator or start crying. Three people ahead of me my GIANT smile on. I was listening to what my classmates were being assigned, a lot of African countries and several Asian countries (which I wasn't expecting). Only one or two to Latin America.

Then it was my turn....And the coordinator said Whitney Dubinsky..RDMA Thailand! (For you non USAID speakers that means the regional office located in Bangkok!) 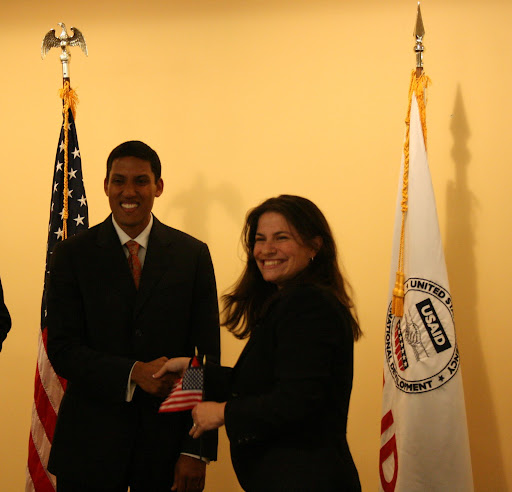 I got back to my seat and immediately tried to make eye contact with Andrew and my parents to see if they were happy. The group kept getting named. The great thing is three other people in my class are going to Bangkok too! So we will know someone. Including an XO, so Andrew Reese if you are reading this, you are my new Best friend :)

Afterward we took a group picture with Shah. We sort of had to run and take this picture. 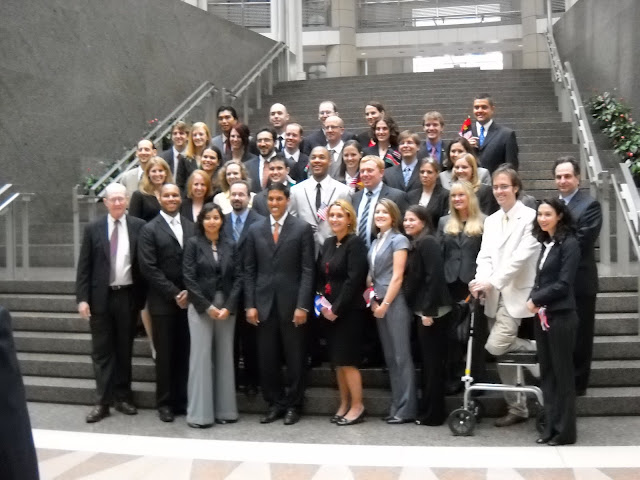 FINALLY, I got to see Andrew and my family and they were ECSTATIC! Andrew and I shared a giant hug and he was ALL smiles (which was great because I remember being VERY nervous about Andrew's response).

Following the ceremony, we ran into Bob, the economists coach. Bob looked right at Andrew and gave him an in-depth talk about the next steps to getting a job in the Embassy and who Andrew needs to get into touch with in Bangkok. We were very appreciative for this. Overall, the ceremony was great and we are ecstatic!
2:34 PM
Whitney Dubinsky
Email ThisBlogThis!Share to TwitterShare to Facebook