Well we are finally settled into Bangkok! We will post pics of the house and everything later in the week, but in order to go in chronological order, I thought I would start by telling you about our first day in Hong Kong. As I am sure you guessed from Andrew's previous post, getting to Hong Kong was a challenge, mentally and physically. I would never suggest ANYONE have 4 connections, its just too chancey. But we got all our flights and arrived in Hong Kong on time, with all our luggage. However, we checked into the hotel at 12am so we decided to skip the night on the town and went to bed.

On our first day we took the Peak Tram to Victoria Peak and hiked around the Morning Trail for probably 2-3 miles. There were BEAUTIFUL views of the Hong Kong Skyline, Harbor and Island areas. We were shocked at not only the amount of foreigners on the peak but also the number of dogs. It seemed like everyone on the peak was taking a stroll with their puppy. It did make us miss our pups a lot. Afterwards we came back down and took the advice of some really nice trailing spouses and headed to visit one of Hong Kong's religious icons. We hopped on the orange line, and took that out to Big Buddha/ Tian Tan Buddha. The trip included a 30 minute cable car ride, which we opted to take with a glass buttom. I may have been slightly uncomfy, and andrew says his knee is still sore from where I was gripping for dear life. The trip was worth it and we enjoyed the shops and shows around the Big Buddha, including a restaurant where we samples some chinese cuisine while watching interesting martial arts performances. 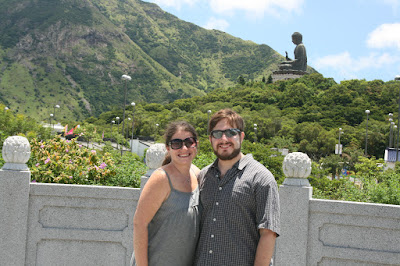 Heres a quick video we shot there with our new cheap camera.

We bussed down after the trek to the top to Mui Wo to take a Ferry back to Central District.

After the Ferry ride back, we did Afternoon Tea at the JW Marriott. Andrew and I sampled different types of Asian Iced tea....it was REALLY hot. Our evening ended with dinner with family friends who are living abroad in Hong Kong.

Unfortunately, my stomach acted up a bit on the drive home and I was REALLY worried about getting sick. So I told the cabbie I was preggers and he drove WAY less erratically...and no, im not pregnant, but I just found the solution to the scary cabbies around the world. FAKE BABIES! That is all, we will share more tomorrow about Day 2 and the move in.