I know, we're a little behind and you all want to know about Bangkok. Isn't anticipation half the fun? We'll try to update our first week here over the weekend....but for now, you'll have to sit through my description of day 2 in Bangkok, which was probably less exciting than Day 1 but had some nice pictures.

We woke up early and headed out to the Hong Kong Botanical and Zoological Garden because, well, I love zoos. 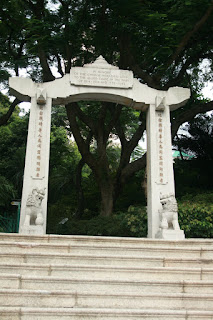 This was the entrance to the "zoo." The top part reads that the gate is a memorial to the Chinese soldiers lost in the "allied cause" of both World Wars. I'm using "zoo" in parentheses because I wouldn't really consider this a zoo - more like a baby zoo. It probably took us close to a half hour to realize that there were no big cats, invertebrates, or even panda bears. Instead, the zoo was made up of just a monkey exhibit and a reptile exhibit. The reptile exhibit has a Chinese crocodile and a Burmese python. That's it. There were all kinds of monkeys and orangutans, and we made it there at the right time because they were hyperactive. One gibbon just swung around his cage in a circle the whole time we were there. Also, a raccoon. That's right. They had a raccoon. In a cage. On display. I wanted to tap a local on the soldier to explain that they're pests that eat garbage and spread rabies. So the monkeys were fun. In the middle of the "zoo" was this huge fountain that created an idyllic and serene environment. Some elderly Chinese women were there doing their exercises. 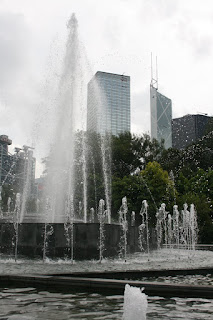 The thinner building with 2 spires behind the fountain is the Bank of China Building of Sim City fame.

The part of Hong Kong I was most excited about was, naturally, dim sum! We ventured into the heart of Hong Kong for breakfast after the zoo. On the way, we past an outdoor market - Gilman's Bazaar - that we thought was big. The ones in Bangkok simply dwarf this one. 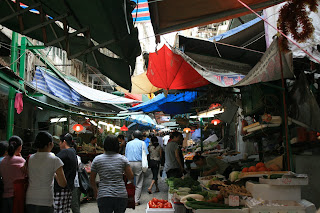 After a quick detour, we made it to dim sum. We were allowed to seat ourselves at any table, but the only table with 2 seats was in the back corner. Just like back at home! The food was great. I don't know if this is good or bad, but it was very similar to Mark's Duck House (if you're from the DC area) or Imperial Seafood (for our Boston friends) [note: Imperial Seafood closed? Boston friends, please confirm!]. We learned that it is OK to get up and approach the cart before the cart makes its way to your table.

Since we had limited time before we had to catch our flight, we sought out a temple. On the way over, we ran into a tea shop and bought a couple different kinds of tea, one jasmine and one green. The shop was on the way to our real destination: Man Mo Temple on Hollywood Road. I couldn't really hear the tour guide we tried to follow, so, according to wiki, Man Mo is a temple for the civil or literature god Man Tai/Man Cheong and the martial god Mo Tai/Kwan Tai. 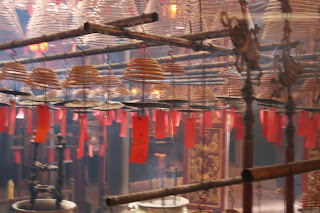 Inside the temple, some people were worshipping. They also burn incense constantly as a form of individual prayer and through many many incense burners in the center of the temple. We heard the tour guide say something along the lines of burning incense is a way to disperse your prayers up to the gods and that the smoke was similar to a wifi signal.