The Mutts Have Arrived!

At 4:15 yesterday afternoon, there was a knock at our door.  Our landlord came to tell me that the dogs were downstairs - fresh off their trip from New York to Bangkok via Amsterdam.  Our dogs are international - and maybe a little jet lagged. 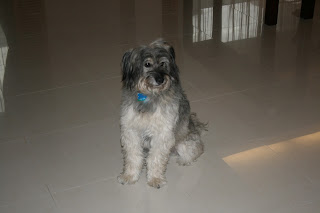 Elko took the trip like a champ.  He was completely unphased and ready to explore the neighborhood.  Also, he likes the cold floors. 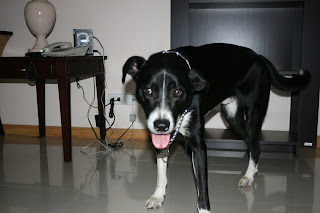 Menlo is doing OK.  He's a little confused and frightened though in odd ways.  He's still scared of taller men and absolutely does not like parked motorcycles.  He has no problem with cars or moving motorcycles.  But if they're parked, he's not having anything to do with them.  The soi dogs were also interested in him, and that may have freaked him out a little.  However, with each walk, he's gaining more confidence and should be just fine. 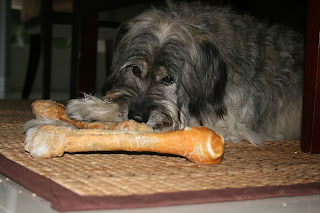 The dogs have been busy since they arrived chewing on these rawhide bones I bought them at the pet store near Big C.  In a bit of a role reversal, Elko has been stealing Menlo's bone from him even though Menlo used to steal Elko's toys in DC.  As you can see, he has both of them in this picture.  It must be because we're in a different hemisphere.