On Saturday, Andrew and I decided to take advantage of a free and "little taken" Walking Tour we found in one of our guide books.  The Walking Tour began at the river close to the Central Pier and off the Saphan Taksin Skytrain stop.  There were a lot of vendors by the river and we were offered like half a dozen boat tours, however, we were committed to our walking tour.

Our first stop was the Assumption Cathedral, which was a BEAUTIFUL church where Pope John Paul II once visited.  Oddly enough inside was a sarcophagus in the church, which frankly was one of the creepiest things I have seen in Bangkok.  Keeping in mind, I ate congealed blood earlier, so that says a lot.  From there we looked at the front facade of the old East Asiatic Company building.  It was an interesting piece of architecture that sadly enough is falling apart.

Next we headed to the Oriental Hotel, where according to the guide we were suppose to stop for luxurious drinks.  Unfortunately, due to our horrible apparel (flip flops and shorts on a typical 90 degree day) we were denied entry into the luxurious hotel.  Elitist!

From there we moved on to the Old Customs House.  Once the gateway to Thailand, the Italian building was built in 1880 with a grand facade and transom windows.  Now it "houses" the fire brigade, but the crumbling structure still remains hauntingly beautiful. 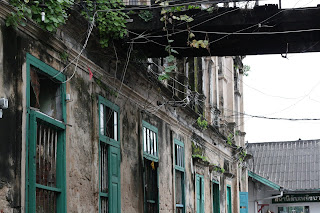 Now, being our luck, an Indian commercial was being shot at the Old Customs House that day.  In between shots the cast and crew were taking pictures and Andrew (being Andrew) jumped into the background of their shots.  OF COURSE they noticed and proceeded to INSIST he join them in pictures.

Our tour ended in Haroon village.  Once the site of the giant Haroon Mosque, the village is a small community of Muslims living together.  There were several restaurants and one community prayer meeting going on.  It was a spectacular sight.