I know I recently posted about the first day Bangkok felt like home.  Well this week was icing on the "home" cake.  For those of you who are incredibly out of the loop, Monday was my Birthday.  I turned the ripe old age of 29.  I was incredibly nervous about this birthday being abroad.  Granted Mom and Dad were in town, and we celebrated Sunday night at another installment of Cabbages & Condoms.  But Monday morning I was still worried.  But all those worries were quickly put to rest when I awoke to smells of coffee and pancakes.  Andrew got up early and made me birthday pancakes.  They were splendid! 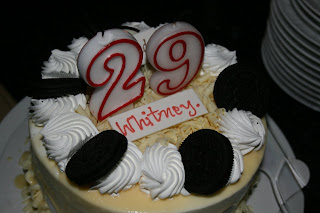 Now to be really honest, I had heard rumors about a celebration in the evening that Andrew and Elisa had been planning as a surprise.  What was really entertaining was that none of my office people said happy birthday to me in fear I would find out about the surprise.  It was cute, because I did know what was going on. 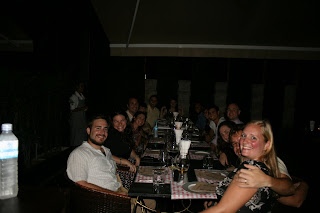 After work, I met Andrew in the lobby and then we headed to Hyde & Seek (close to USAID), the restaurant where Andrew had set up the celebration.  The tables had lilies and pink roses on them and he had set aside a great area outside.  All sorts of people came.  I hadn't realized until then how many people Andrew and I had gotten to know.  We have met a lot of people in our building and have gotten close with them.  About 8 building friends came out to celebrate and then there tons of our AID friends.  It was great having all those folks together.  As a bonus Bret was in town!  It is great having the Asia training facility in Bangkok because I get to see DLI friends! 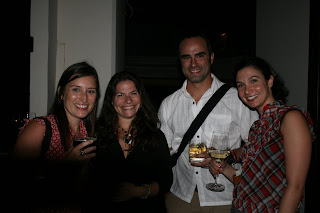 BUT the best part, hands down was the ice cream cake Andrew found.  It had started to get warm at the restaurant, but the cake cooled us all off.  There was a lot of laughing, and a lot of drinking...and overall a great time and a great birthday!