What to do when your parents visit?  Who would have thought we would be asking this question before our HHE arrived?  My parents decided a while back to spend the New Year with us here in Bangkok.  We were a little nervous because we were new to the city and didn't know too too many tourists places, but we put together a packed agenda.  Mom and Dad arrived at 11pm Thursday night and after working until 8pm that night, we met them at the airport.  From there, we headed back to our apartment and Mom and Dad dined on Andrew's left over cooking experiments.  The rest of us headed to bed, but Dad remained on the phone until the wee hours of the morning (work stuff...who is surprised?) 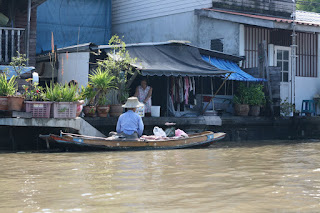 Friday morning we got up EARLY for some sightseeing (well, we actually got up early to Skype with Andrew's family and to wish his mother a happy birthday. . . Happy Birthday, Mom!).  I had booked a package online, and it was great.  We started out exploring the canals of the Chao Praya in a long boat.  It was an interesting look at the people who make their livelihoods off the river.  We saw a couple floating river shops and enjoyed looking at the "wild life."  The guide pointed out a giant river monitor and at a temple we threw bread to the BIGGEST catfish I had ever seen. 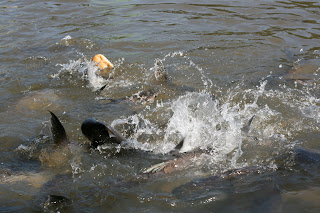 After the long boat tour, it was off to the Grand Palace.  It served as the official residence of the Kings of Thailand from the 18th century onwards. Construction of the Palace began in 1782, during the reign of King Rama I, when he moved the capital across the river from Thonburi to Bangkok. The Palace has been constantly expanded and many additional structures were added over time. The present King of Thailand, King Bhumibol Adulyadej, however, resides at the Chitralada Palace.  Our guide was really knowledgeable and chatted at length about the royal family.  One of the highlights for me was learning why the king's flag was yellow and the queen's is blue (they are the colors associated with the day of the week they were born).  The palace was spectacular and I was impressed by the influences from other architecture styles, religions, and countries.  There were pieces of Italy, Laos, China, and even a mini version of Angkor Wat. 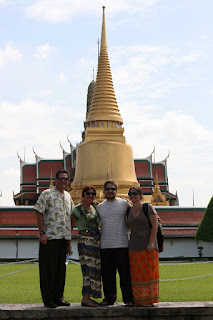 After the palace we headed on to Wat Pho, one of the world's oldest and largest wats.  Interestingly enough, our guide had spent 5 years as a monk at the temple.  Wat Pho is home to one of the most spectacular Reclining Buddhas, which happens to be the third largest Buddha in the world.  It was beautiful, though, there were A LOT of tourists. 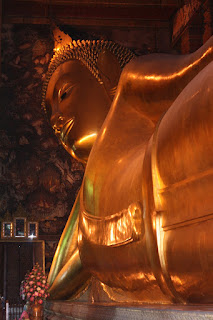 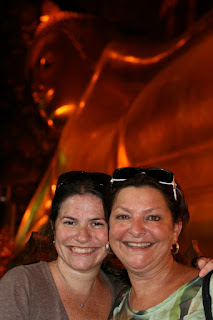 After the adventurous day, Dad and I spent the afternoon working while mom and Andrew passed out on the couch.  We enjoyed a spectacular meal at a local restaurant, recommended by the fabulous Elisa.  Afterwards, we headed UP to Vertigo.  Mom and Dad were wowed by the views of Bangkok, mesmerized by the city, and a little tipsy from the exotic drinks (another lychee martini for me!)

Check out the whole album below!