Our friends from Timor-Leste visited Bangkok a few weeks back for training.  First, I'm told that you can call it Timor East in French but not East Timor in English.  Second, I think it is pretty cool that I can say we have friends from Timor-Leste.  But I digress.  Early in the week, Sara mentioned she was interested in taking a Thai cooking class.  Since I had some free time and was interested in taking a class as well, we decided to attend the Bai Pai cooking school, which I believe translates to Bamboo Leaf.

Bai Pai was actually a great cooking school.  They picked us up at Sara's hotel, drove us to the class, and were very friendly and accommodating.  The school is in northern Bangkok near the Jattujak weekend market, tucked away through a maze of allies. The school was set in a tranquil setting in what looked like a converted house with a huge garden and a series of ponds.  The class started with a lesson on how to open and shave a coconut and then make both coconut milk and cream.

Then, we toured the garden.  The staff showed us the different types of peppers, limes, kaffir limes and leaves, and eggplants.  They also explained what galanga is and how it is different than ginger.  We also picked and tasted some lemongrass.  This was helpful because the Thais cook with very different ingredients than we do, and, while I'm used to many of them from eating them, I still wasn't entirely sure what all the ingredients were and how they added to the dish.  I also learned that Thais will never use lemon to cook because the flavor will clash with the other flavors they use.

The class consisted of four dishes:  Pad Thai (stir fry), Gai Satay (chicken satay), Yam Nuea Yang (mixing flavor beef grill, or spicy grilled beef),and Tab Tim Grobb (crunchy ruby, or water chestnut in coconut milk).  Surprisingly, the dishes all came out really well, and I think I can recreate them at home.  Only the spicy beef salad had lime in it, and I was able to experiment with the number of peppers to add.  For the record, I think my limit is three chili peppers.  During a demonstration, the master chef said that she likes her spicy beef salad only a little spicy so she would add about seven or eight peppers.  For the farangs in attendance, she only put in three, which still added a nice kick. 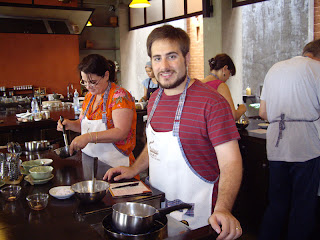 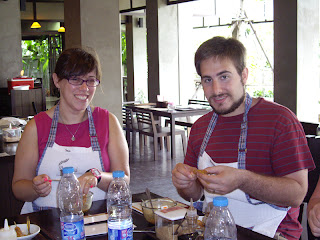 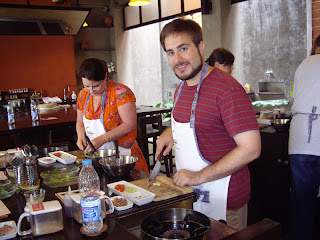 Oh, and at the end of class, while you're eating the water chestnuts in coconut milk, they give you a magnet with a photo from the class.  I've since realized that all our friends in the apartment complex have this photo with their wife. I have one with Sara.  It's a little funny, but we had a good time.  And she might have convinced me during the class to check out Timor if the opportunity arises.