On Sunday, we took Whitney's parents to The Jim Thompson House before Thai massages.  Jim Thompson's house is kind of a staple tourist stop in Bangkok.  To make a long story short, Jim Thompson was born in Delaware, served in the US Army (more specifically the OSS, which became the CIA - thank you Harry Truman) during World War II but the war ended when he was en route to Bangkok, moved here a few years later, became enamored with silk weaving, and mysteriously disappeared in the Malaysian jungles.  I don't know why they kept telling us that there were no one ever found traces of his body or clues to his disappearance because we're pretty sure the tigers ate him. 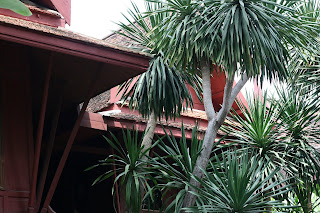 Anyway, his house became a tourist site.  It's a beautiful teak house surrounded by luscious, green gardens.  He decorated it in local style with a few modifications like areas with Italian marble floors.  As with the rest of Thailand, he had Buddha statutes throughout. 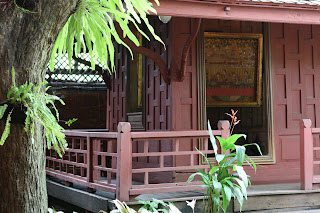 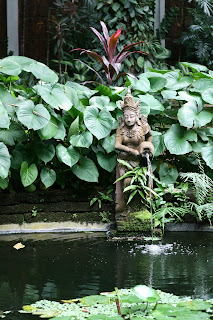 The complex also has an art center, a gift shop, and a restaurant and bar.  We found it funny that you could find the Jim Thompson corporate logo on every piece of clothing sold and anything else they could put it on.  It was on the buttons of shirts, on the windows of the restaurant, on the napkins, on the straw wrappers, and even on the chopstick wrappers.  It cost 100 baht (roughly $3) to enter the museum and came with a compulsory tour that took about 45 minutes.