Back to our Kathmandu trip.  Over our first weekend in town, we hired our guide, Bikesh, to take us to Kathmandu's second sister city, Patan.  Patan was founded in the third century B.C., and, like Bhaktapur and Kathmandu, had its own Durbar Square.  In 1979, it was included in UNESCO's World Heritage Site with the entire Kathmandu Valley Monument zone.

Most of Durbar Square consisted of ancient temples and incredibly detailed art.  There was also a huge palace that was turned into a museum, and natural spring water faucets that have been running continuously from a source in the Himalaya Mountains for hundreds of years.  These were the faucets I drank out of when a certain microbiologist told me that they were pure, naturally filtered, and very clean.  Then, I was told that it would probably make Westerners sick.  Then I got sick.  Since there was so much amazing intricate art, I'm going to post a few pictures and a link to our Picasa stream.  Do yourself a favor and click through some of them. 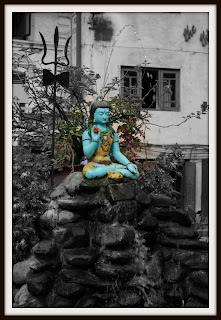 The best part of the trip was easily the Monkey Temple, which is actually called Swayabhunath.  It was this huge hill that monkeys, dogs, and pigeons hung out on.  I'm told there was a temple there, too, but I never saw one.  I was trying to wait for Whitney to go to this temple, but when I told a cab driver to take me to the National Museum, he did not know where to go.  So I told him it was by Swayabhunath, and he took me to the temple.  This was helpful because I climbed up the ridiculously steep steps and came down a much easier way out.  Totally on purpose, I scouted out the easy way for Whitney to get to the top.  She owes me.  Also on the way up, I met a Canadian couple living in Israel.  He was a lawyer, she was a teacher (where have I heard that before?).  We took a break from climbing and discussed American politics for a while.  They just couldn't believe how some in our country are "destroying what America stands for" and were incredulous because "the whole world looks to America to lead."  It was nice to find foreigners that were more knowledgeable about America than most Americans.

Swayabhunath is an ancient temple that sits high on a high overlooking Kathmandu city.  It is one of the oldest religious sites in Kathmandu, dating back to the 5th Century.  Clearly, the best part of the temple is that "holy monkeys" live there and run around freely.  Lots and lots of monkeys.  All over the place. 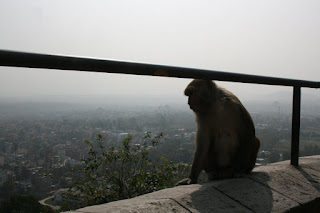 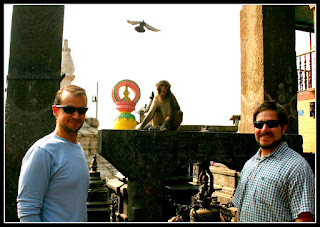 And finally, this is for Whitney's Dad: