Mele Kalikimaka Is the Thing to Say

Editor's Note: Whitney wrote about The Civil Service Recognition Act this morning.  The Act is a long overdue piece of legislation that recognizes diplomats who make sacrifices for their country.  If you haven't seen it, you can read it here.

Bucking our new tradition of spending Christmas in Key West, Whit and I found a closer beach in Vietnam.  We spent 5 days on Phu Quoc, a small island in the Gulf of Thailand close to Cambodia.  I don't have too much to say about the vacation since we mostly planned on sitting on the beach for 5 days.  We did, however, take 3 "tours" that I'll share some stories from.

On our second day on Phu Quoc, we went on a snorkeling expedition.  A bus picked us up at our hotel and took us to a pearl farm that "taught" us how they take pearls from oysters.  Then, we went down to the harbor and boarded our boat.  We stopped at a seafood farm in the water and then continued to three snorkeling stops along Vietnam's coral reef.  The tour served us lunch, which included sea urchins, fried mackerel, morning glory, and pho.  After eating, one of the boat's crew offered a Canadian guy on the tour with us and me shots of some fermented sea urchin juice.  I'm pretty sure it was just a jar of sea urchins filled with wine and left in a glass jar.  At any rate, it tasted like tequila.  The guy also said that it would make men "strong" and then made some interesting ummm coital noises. This was by far the best tour we went on.

The second tour was a night trip out of the harbor for squid fishing.  As I learned in Pranburi, which is a Thai beach southwest of Bangkok, squid are attracted to moonlight so boats go out when the sun sets and focus their boat lights onto the water.  There were about 15 of us fishing for a couple of hours but we only caught 2 squid.  I'll say we were in a bad spot.  Gary might point out that if there were grouper down there, I'd have caught something.  On Christmas day, we took another tour into the national park on then island.  This tour was operated by a company called Phu Quoc Beach Travel Co., Ltd.  If you're reading this because you want to visit Phu Quoc, don't use this tour company. Just don't.  They took us to see the fish sauce factory and pepper farm, some old Vietnamese house (still not sure why we stopped there), a little stream in the forests, and a "very old" Buddhist temple that was built in the 1930s.  After our time in Bangkok and visits to Kathmandu and Hong Kong, 1930s wasn't very impressive.

So we ended that tour and went back to the beach.  We had rented a beach bungalow, so our porch looked right out onto the beach and we had maybe a 30 foot walk to the water.  The water was a nice turquoise color and you could see your the seafloor several feet down.  The weather was also perfect the entire time we were there, and the water was quite warm. 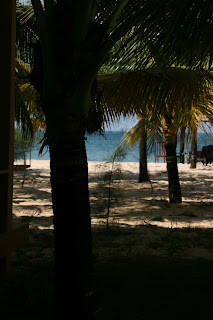