Since this blog is meant to be a chronicle on the travels of the Dubinskys, I thought I would share with you
my recent trip to Kazan.  I know what you are thinking..."Kazan?  Whitney, where is Kazan? Are you sure you are spelling that right?"  Well, yes I am, and Kazan is in Russia.  And don't be alarmed, this was a common reaction by everyone when I mentioned where I was going. 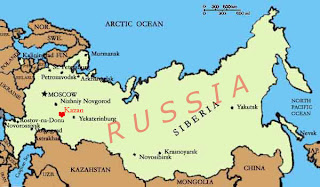 Kazan is the "third capital" of Russia and is the 8th most populous city in Russia.  Kazan is known as the
sports center of Russia, and the city will host the 2013 Summer Universiade, 2015 World Aquatics Championships, and 2018 FIFA World Cup. (Fun Facts :) ) I have included the map above to give you an idea of where Kazan is located.  I personally was in Kazan because it played host to the second Senior Officials Meeting for the APEC Secretariat, Russian Host Year.  In other words, the Russians chose Kazan as one of the cities to highlight this year. The other meetings have been St. Petersburg, Moscow, and the heads of state will meet in Vladivostok. USAID has a  project with the Secretariat and I was there to monitor the ongoing efforts.  Additionally, I was able to sit in on some interesting meetings on Food Security and  Economics.  Overall, they were really interesting.  But you don't want to hear about APEC meetings... 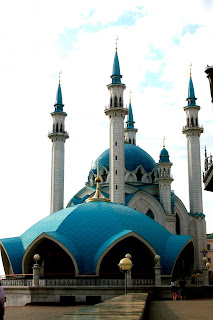 One of the highlights of the trip was viewing one of the largest mosque in Russia, Qolsharif.  Though it was only built in 2005, it was dedicated to the milennium birthday of the city. Kazan has a thriving muslim culture. The multi-ethnic city is is honored by UNESCO and famous for Muslims and Christians living side-by-side in peace. The mosque has a gorgeous interior and a great architecture, highlighting Tulips throughout the structure.  The tulip is the national flower of the Republic of Tatarstan. 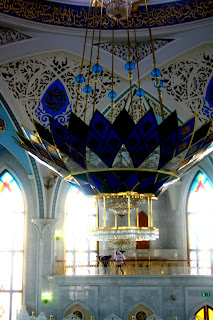 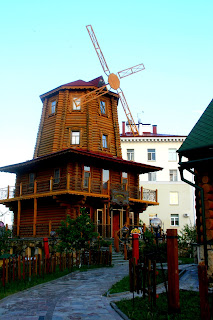 Speaking of Tatarstan, I also had the oppurtunity to take a tour of a "reproduction of a Tatar village."  It was a tad odd that in the middle of Kazan they have built this fake village for city tours and is very Disneyworldyesque (its a word).  However, it was an interesting taste of Tatar culture and food, which was Russian kolaches filled with meat and were great.  And honey covered pastries.  Interestingly, they also serve cherry juice with their traditional meals. 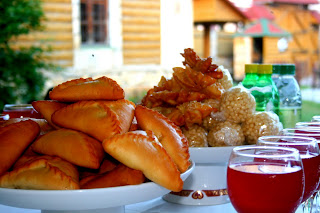 I was able to try some interesting Russian food and walk around the main shopping area.  However, I was in a lot of meetings and didn't get to tour too much. My overall opinion is that Kazan is a nice, quaint, charming city.  However, there wasn't a weeks worth of entertainment.  If you want a heavily entertaining
Russian experience, I would try Moscow first.  But Kazan is great for just strolling and exploring and the people are helpful and nice. 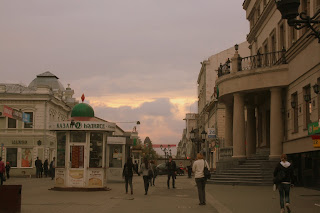 After the APEC meetings, Andrew and I met up in Germany, but since it was his first time there, I will let him write about it.