Home » geekfuel » M » unboxing » Geek Fuel Unboxing June 2015: The Dinosaurs are Out There

Geek Fuel Unboxing June 2015: The Dinosaurs are Out There 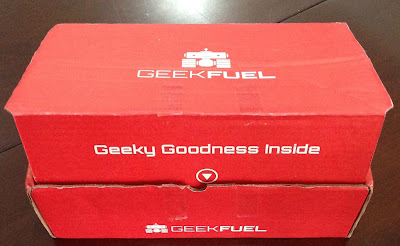 Hi there, M again, sneaking onto the blog and hoisting the geek flag with Geek Fuel. Today's box is one that I'm super thrilled with, to the point that after I opened it I immediately went and subscribed for the 6-month deal. Well, 'immediately' when it is defined as "after bouncing around my office and messaging Whitney about how I'm glad she's a bad influence" :) So, know that I'm a geek, I'm super-psyched about the goodies, and that the links in here are referral links. 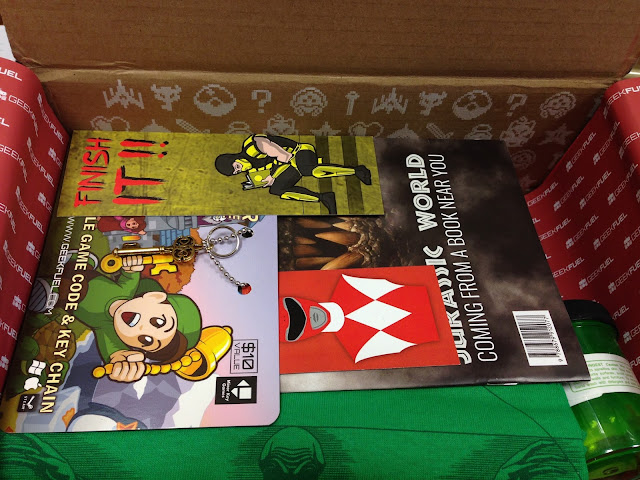 Geek Fuel, if you couldn't tell from the name, is a box designed for geeks. A description of their Monthly Mystery Box of Geeky Goodness from their website: "Geek Fuel is a monthly mystery box filled with t-shirts, toys, digital games, limited edition collectibles and all things epic." They offer several subscription options, from monthly to annual, with discounts for each larger subscription, and 'mystery boxes' on some of the larger ones. As mentioned above, I started with the monthly, so this was $23.90 including shipping. The 6-month I signed up for averages $21.90 a box, with a 'mystery item' at some point. *Oooh*
This month, I've got to say they lived up to their calling. The box arrived quickly, once it shipped. That was the only annoying thing - while other boxes seem to ship at will throughout the month, Geek Fuel has a set date, so, since I'd missed the May box, I had to wait (im)patiently for the June one. Thankfully they gave me a tracking number so I could stalk it, like a crafty velociraptor (clever girl...) rather than drive the mailroom nuts. It arrived in good shape, and tidily packaged. I immediately tore into it, T-rex style, expecting disappointment, but thrilled at what I got. It contains:

I've read Jurassic Park before, back in high school, so it will be nice to revisit, and I don't remember if I read the sequel or not (what did we do before Goodreads to track our books?) so they'll make good vacation reads. I like that they're timely, too, with the new movie coming out. And seriously, any box that sends me books is a winner in my book (you see what I did there?) Now, if only they could have mailed me Jeff Goldblum....

*ahem* The rest of the box contains an X-files shirt (see below) and 90s stuff. While I love the Teenage Mutant Ninja Turtles (heroes in a half shell, turtle power!) reference, I don't really know what I'll do with glow-in-the-dark goo - any friends with kids old enough not to try to eat it (I think the likelihood of eating it and becoming a ninja and meeting Master Splinter is lower than that of a trip to the ER) are welcome to it. The Power Rangers magnet got a 'meh' and was thrown on my fridge. I will try the Steam game, but I've never heard of it before. It lists itself as a Geek Fuel Exclusive, so who knows.... That they tried to put a 3rd theme in, geekdom in the 90s, is well-intentioned, but does feel a bit random, though I did laugh at the references to Mortal Kombat and TMNT. Never really got into Power Rangers, but yay for less blank space on my fridge.

Their little magazine is neat, with pics from Denver ComicCon and brief articles (in need of a bit of editing...) on the themes - 90s geekery, Jurassic Park et al., and X-files. It's cute, and a nice touch, giving background. 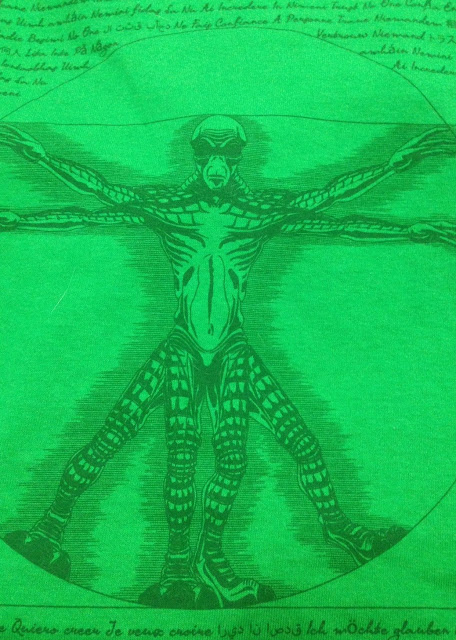 I just want to geek gleefully for a second about the shirt. Not only does it fit perfectly(!!) but it's solid quality and makes me laugh so hard. If you can't tell from the photo, it's an alien version of the Vitruvian man, complete with 'Leonardo's' scribbling, except in this case it's the catch phrases from X-files: "Trust No One" and "I Want to Believe" in multiple languages. Can't stop laughing when I look at it. I love it. Love it, love it, love it. The T-shirt is one of the reasons I decided to go with Geek Fuel in the first place - they promise an exclusive T-shirt in every box - and I'm super happy I did so. It will be getting its public wearing at the first possible opportunity. Can T-shirts be considered 'business casual'?

Clearly Geek Fuel has its finger on the pulse of geekdom, with the new Jurassic Park movie breaking box office records left and right, and the snippets floating around about a new mini-series for X-files. For the record, I don't care if Duchovny's just doing this as a career restarter, trying to get back to the obsessive Bree Sharp days, as long as they bring back Krycek. Seriously. I could possibly be appeased with Byers. Maybe.
TLDR: Geek Fuel's Monthly Mystery Box of Geeky Goodness is a whole lot of fun for those of us flying our geek flag high, and I'm super excited to see what I get next month.