Nature Box bills itself as healthy snacks delivered to your door. Living in West Africa, I find healthy-snacks-that-probably-won't-destroy-my-digestion to be few and far between. So, why not? (Also, word to the wise, hide your credit card from yourself when Whitney tells you she's found a fun new habit).

How it works is that for $19.95 a box (cheaper if you buy multiple boxes at once), the company will send you a box with 5 treats in it suited to your preferences. Options are every other week, every month, every other month, and every 3 months. You can set up a taste profile and let it choose for you, or go through and pick your 5 yourself. This being my first time, I opted to pick everything for myself, though I did go through the snack questionnaire.

﻿﻿
In theory, Nature Box has hundreds of snacks. Given that I don't eat wheat, my choices were quite a bit more limited. I was basically down to dried fruit (I make my own, thanks), nuts (which I get in bulk on Amazon), and a few random treats which seemed novel. Yay treats!

The package arrived quite rapidly and in good shape. I ordered on the 26th of May and it was at my desk on the 9th of June - and that's going through the pouch. I tried to send it through DPO but could not with their initial settings - at the time I couldn't get it to register AE as a legitimate state. That said, I've since been on and changed my shipping address, so, with a bit of care, they CAN ship to DPO. 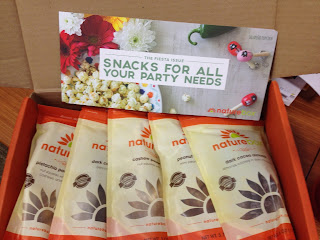 The presentation was nice - pretty chill designs, no ruptured or oozing pouches, no weird smells - good to go! Unfortunately, the first thing I noticed was that the pouches were not particularly bulging with snacks. Each snack here is between 3-4 oz, which may sound like a lot, but would not necessarily sustain you during an OMG-end-of-the-world stress eating attack. Certainly not the zombie apocalypse. But, still, good to have on hand, especially around the office or as emergency snacks in the car when the bush taxi in front of you has broken down and blocked your entire lane on a 2-lane bridge.... But I digress - to the treats!

The treats each came in their own little pouch. Sharpie and PK used for scale.

First up were the dark cocoa almonds - 4 oz, or about a double large handful. As you can see, they were mostly melded together into a giant clump - W. Africa is not kind to things that melt. Thankfully, they broke apart fairly easily and were delicious. I know because I broke into them immediately at work. Very dark chocolate but not too bitter. I'd order them again, probably.

Next up were the Peanut Butter Nom Noms - 3.7oz. Yes, that is their actual name. Yes, there were only six. They are quite dense little cookies, and very moist, but still, that there were only 6. I ate one, and it was tasty, with oats and chocolate chips, but not sure I'd order it again. Six.

Then came the Dark Cocoa Nom Noms - 3.7 oz. I wasn't particularly creative with my choices, but, as I said, they were limited for gluten free. Again, dense, moist, and super tasty, but only FIVE. Seriously. Five small (but still, delicious) cookies. I could potentially see me gaining some sort of magic self restraint and making them last 5 days, but following the scanty supply on the others... I was getting frustrated.

The final two packets were Pistachio Power Clusters and Cashew Power Clusters - 3 oz. each. The cashew ones are pictured above, by that point I was getting a little bit frustrated with the sizing. Pistachios looked almost exactly the same, except, you know, with pistachios. If you like nut bars, you will like these. Again, very tasty, not too sweet, really tasting the flavor of the nuts rather than the sugar as in brittle. Fairly filling, so I could see these each making two separate snacks, even on a stressful day

This was my first food box ever, and while I'm a little underwhelmed with the quantity for the price I could also be unused to 'normal' prices. I paid the one-box only fee of $19.95, which means each of these little snacks was about $4 (I understand that they have to pay for shipping, but I've been spoiled by Amazon Prime). I kind of felt like I was paying Starbucks prices. That said, the quality on everything was top notch, and I was glad to see only natural sugars on the labels. I'm debating whether or not I want to get another box from them - the tasty treats I got are delicious, but these were the only gluten free ones that really called my name, and for the price, I'm not sold. On the other hand, if I'm willing to do it, the longer subscriptions are at more reasonable prices - $17.95/box for 3 boxes, $16.95/box for 6 boxes, $15.95/box for 12. Debating, and I probably will if the variety of gluten free options widens a bit.

Overall (out of 10)
Written by contributor M
M is enamoured of puzzles, presents, and proper spelling. She resides in W. Africa with a spoiled house leopard and enjoys tea and video games when she's not single-handedly saving the world.
Follow Military and Expat Unboxing (Foreign Service) The Dubinskys Travels's board Nature Box Unboxing on Pinterest.