Home » M » unboxing » Yuzen » Yuzen Unboxing. Or: Sometimes it's fun to give things, too.

Yuzen Unboxing. Or: Sometimes it's fun to give things, too.

So, sometimes it's more fun to give than to receive. Occasionally. Every now and then. Maybe.  Living in West Africa, there are lots of cool things I like to send people - there's beautiful jewelry from the Tuaregs, gorgeous masks, shea lotion, homemade moringa powder, Malian mudcloth... All kinds of beautiful things. Unfortunately, there's also a limit to how many masks/earrings/wedding blankets one human can own. And then you're stuck. What do you get for someone who's thousands of miles away, who's already been given one of everything 'neat' and 'exotic' that you can think of from your current post? It's not like you can just pop around to that trendy new boutique that just opened up around the corner next to the latest Starbucks, and Amazon, while an FSO's saviour most days of the week, doesn't necessarily have the same soul that you're looking for. Enter the subscription box!

I wanted to get my mom something as part of a belated Mother's day, and was out of ideas. Enter Yuzen, which bills itself as a quarterly spa gift box full of all natural goodies. You can subscribe for yourself at $33/box, received every 3 months, or gift boxes, either once for $36 or a package of 3 for $99. Being a good daughter, I of course went for the three. Mom's 'Summer' box shipped almost immediately, and arrived within about a week. They even sent me the tracking number so I could tell her to go rush to her mail box when it arrived. Totally fun. 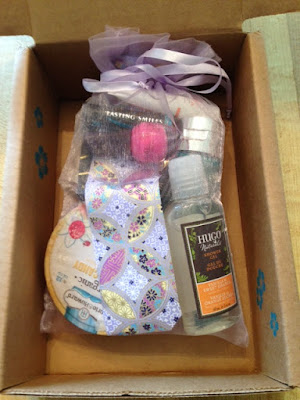 Behold, Yuzen's summer box. This is after Mom had rifled through it, so it's lacking the pretty paper packaging and description slip, complete with gift note, but you can still see the pretty Japanese paper that was around the wrapping paper. She liked it so much that she's going to be using it as a bookmark. The full description of what came in the box can be found on Yuzen's Summer Box site, but I'll walk you through it

SHEAMOISTURE Zanzibar Marine Complex Replenish & Rejuvenate Hand Cream
TORIE & HOWARD Meyer Lemon & Raspberry Organic Hard Candy
AROMAFLORIA Muscle Soak Ocean Mineral Bath Salts
The candy and the hand cream are the two my Mom's really dug into so far, and she loves them. I suspect that the candies may, in fact, be gone by now. More importantly, though, she found the hand cream to be up to the challenge of the desert (she lives in the Southwest), and will probably go find some more after this batch is gone. Given that I've seen her put krazy glue on cracks on her hands to keep them closed in the dryness, that's a strong recommendation. 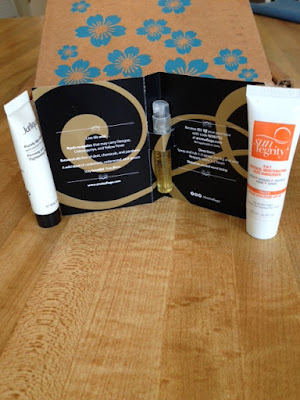 JURLIQUE Purely Age-Defying Firming and Tightening Serum
AROMAFLAGE Botanical Fragrance & Insect Repellent
SUNTEGRITY 5-in-1 Natural Moisturizing Face Sunscreen
Mom's just started using these, but so far she likes them. Living in the Southwest, the sunscreen is a necessity, and she said to never pass up an opportunity to firm and tighten. Apparently even the insect repellent smells lovely. And that's another thing about everything in this box - it all smells good. Having seen her sneeze at the slightest hint of something off, that's a statistical near impossibility. 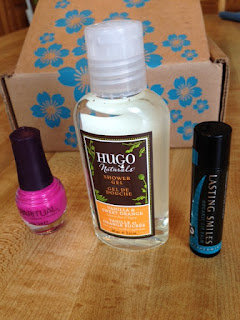 SPA RITUAL Nail Lacquers
HUGO NATURALS Vanilla and Sweet Orange Shower Gel
LASTING SMILES Organic Peppermint Creme Lip Balm
I don't think I've ever seen my mother with pink nails, but there's a first time for everything, and she says she's game to try it. I've used sparitual before in other shades, and have been consistently happy with the quality. The lip balm and the shower gel will have to wait and see, but the products themselves look good.

Overall, I'm thrilled with the quality of the box, the fun I had in sending it as a surprise, and that my mom loves it, too. All of the products seem top quality, and in substantial amounts. I think subscription boxes are going to be my go-to gifts from now on. I chose Yuzen because Mom's big on the clean, calm, simple Japanese aesthetic, and because I knew she'd love the little touches like the handmade Japanese paper wrapping slip, but I've also come across others that I think will go well for other family members, and friends. Also, if there are any Stateside folks wondering what to get for their FSO that has everything (or who at least has Amazon Prime and a sizeable consumables shipment), surprise subscription boxes could be something fun, and there are boxes out there for just about everyone.

TL:DR - Yuzen is a fun, Japanese-y spa-themed box that makes a great gift, and that I wouldn't mind receiving either  *hint hint* :)