I think GameBox Monthly has the potential to be one of our favorite subscription boxes.  We have a little child who goes to sleep at 7:00 and live in a city without a vibrant night scene.  GameBox Monthly fills a void by, so far, sending games for as few as 1-2 players that have minimal set up and only take about 30 minutes to play.  Last month, we reviewed Bullfrogs.  This month, Brian sent us a game called Dungeon Roll. 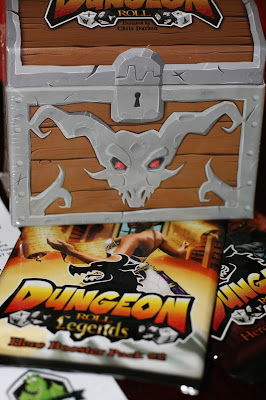 I'll admit, when the box arrived at DPO, we were really disappointed.  It was a small box that we saw had multiple sided dice and playing cards, which were actually booster packs.  We assumed the game was some kind of hybrid between Magic and Dungeons and Dragons, two games I've never been interested in playing. 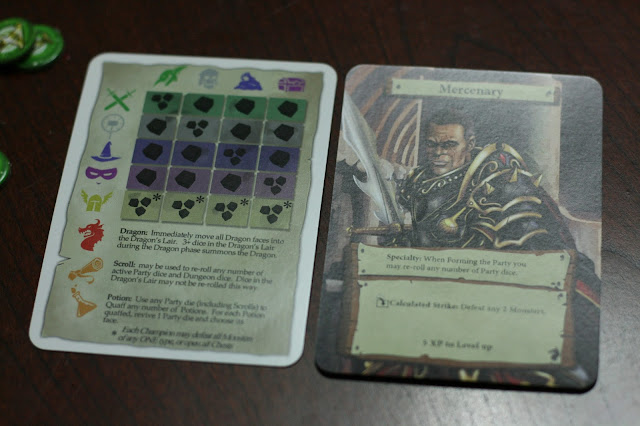 The game itself is quite simple, even though the youtube video they advise you watch makes it sound complicated (and is incredibly dorky).  It's an adversarial dice game where the you take turns playing the adventurer and the monsters.  Each player rolls their respective dice, which determines the outcome.  In the simplest terms, one hero kills one monster but each has one specific monster that it can kill multiple of with one dice. There are also potions and treasure chests to add a little more variety to the game. 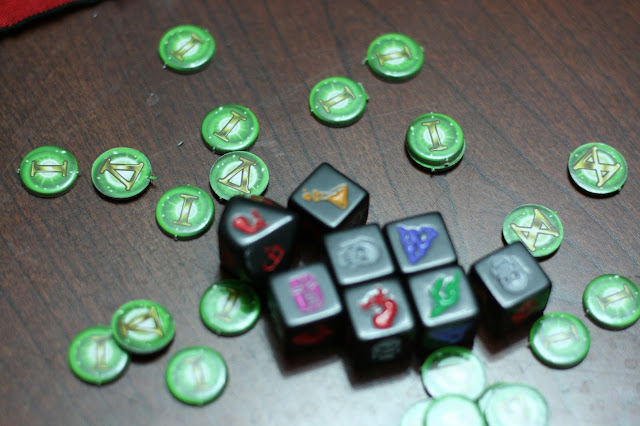 Each player also has his own hero avatar, which gives him other special abilities.  The included booster packs gave us more avatars to choose from.  You get experience points for clearing levels, and the player with the most experience points wins. 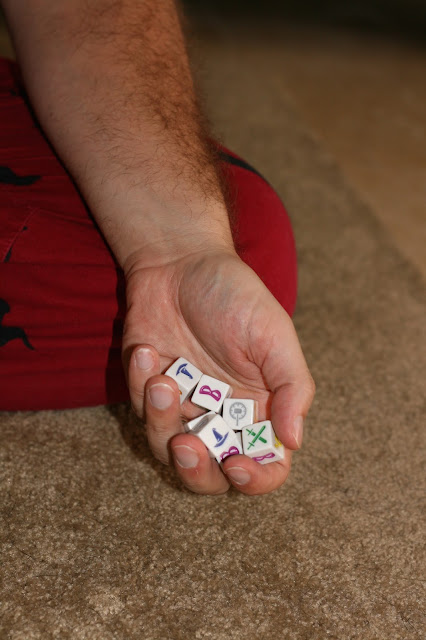 So, after finally figuring out how to play, we gave it a whirl.  The actual game play only took about 15 minutes, but we were surprisingly into it. I think it will become more fun as we figure out the strategies involved in the game and not relying on sheer dumb luck. 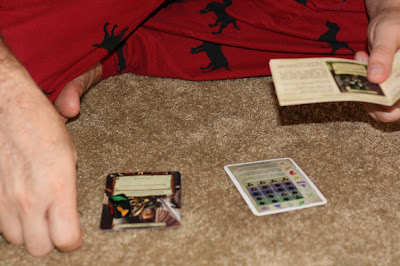 Now, a quick word on pricing.  GameBox Monthly costs roughly $25 a month plus $5 shipping.  At the time I'm writing this, I see this game for as little at $10 online and the booster packs are labeled as $5 each, for a total of about $20.

Whitney emailed Brian at GameBox Monthly about the discrepency, and he promptly responded with a logical answer.  His business model, and the lead time it requires to source and ship the games, means he can only promise to match the manufacturer's suggested retail price, which he claims was $45 for this game set.  Because it takes him time to collect and ship the games, he can't anticipate if a retailer will later undercut his price.  They're also trying to add value by adding exclusive content and other swag to their boxes.  He promises that he is trying to solve the problem.  Fair enough.

So if you subscribe, you won't necessarily get the best price out there, but you will have someone to curate your games and ship directly to you once a month.  For $30, if you count shipping, you're not going to overpay by a tremendous amount, but you can nerd out once a month as you open your box and tell your friends to come over and drink all your cinnamon whiskey.  I'll stick with it.

Overall, out of 10, I give GameBox Monthly a 7 on quality, 5 on cost, 9 on appropriate for me, and 9 on fun (+1 because I won).
2:04 PM
Unknown
gamebox, unboxing
Email ThisBlogThis!Share to TwitterShare to Facebook