Home » naturebox » unboxing » Nature Box July Unboxing: All the snacks are belong to me.

Nature Box July Unboxing: All the snacks are belong to me.

First off, I realize that in the June unboxing I said I was on the fence about Nature Box. However, I really liked the quality of the snacks, if not the quantity provided, so I gave it another go. I was not disappointed. 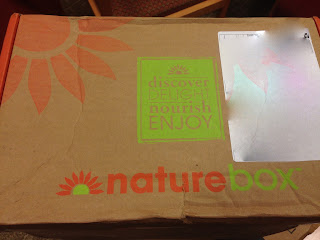 The box took a bit longer to arrive than last time, but that was thanks to the DPO; it shipped on June 16th, and I'd placed my order on the 14th. It also arrived looking a bit worse for wear, but none of the goodies inside were impacted. And there were a lot of goodies! 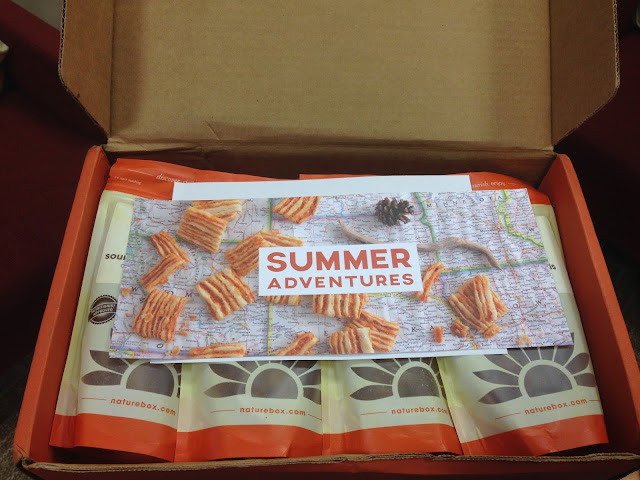 You see, I feel that have 'broken the code' on Nature Box. My issue before was the cost per item, which on the month-by-month subscription comes in around $4, which I can't really justify for 5 nom noms, for example. However, they have the option to do snack addons, and each additional snack is $3, which is more than reasonable for the quantity/quality. So, with a bit of careful picking, (and another 'pro tip' - their suggestion algorithm isn't particularly good, it's worth the time to go through each category and pick your items) you've got yourself a really great snack box. As you can see, I packed mine solid. 7 yummy goodies to enjoy! 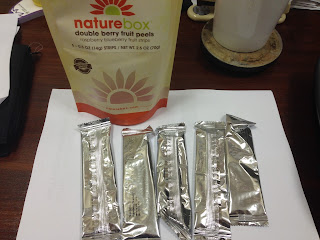 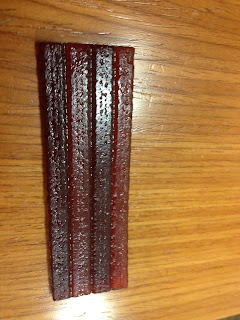 I was in a snacky mood, so dove into the box first thing. Went with the Double Berry Fruit Peels, 5 x 0.5 oz, which I'd been excited about but turned out to be the only disappointing ones. They were tiny! And 5 of them, though this was clearish on the site. Tasty, because everything from Nature Box is tasty, but I think I'll stick with my other fruit leathers. 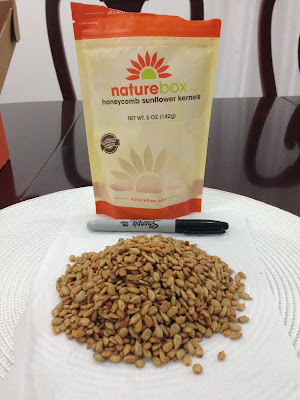 Everything else was great, though. Next up were the Honeycomb Sunflower Kernels, 5 oz. I would offer to share them with you but they are gone. Gone. I took them to work the other day and they didn't survive it. I started out with a pinch at a time and by the end of the day I had tipped the entire bag out. So good. Sweet but not too sweet and yum. Highly recommend them if you're not allergic to any of the ingredients (all fairly clear on the Nature Box site). 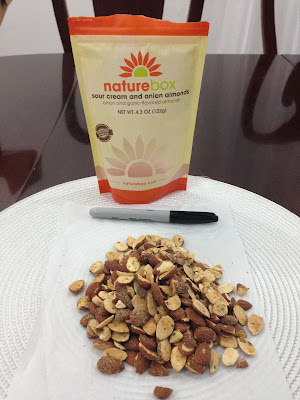 Next out of the box were the Sour Cream and Onion Almonds, 4.3 oz. Snacks this round were clearly more substantial than my picks last time, and I was pleased both with the quantity and quality. They're a little milder than I'd hoped, not an overwhelming chips and dip taste, which means I can probably share them, if I decide to be so kind, and dip them in stuff if I want more spice. 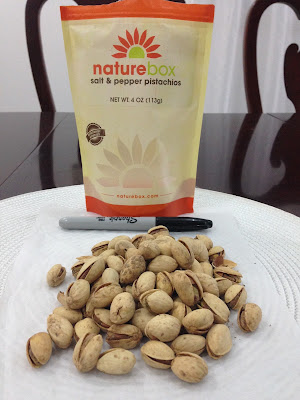 Then were the Salt & Pepper Pistachios, 4 oz. Tasty, but for me they border on too peppery. They have a kick to them which I like, and aren't too salty. Otherwise, just your yummy tasty pistachios. These will probably be my next office snack. 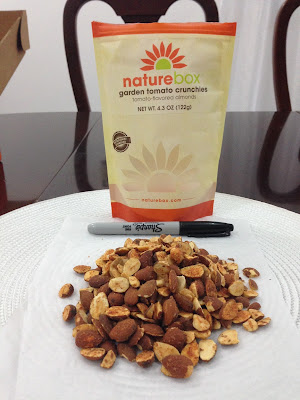 Then we had the Garden Tomato Crunchies, 4.3 oz. These are kind of odd, in a good way. They're almonds, but don't taste entirely almond-y. Or tomato-y, for that matter. I don't know. They're tasty enough, but I have no idea what the taste is... 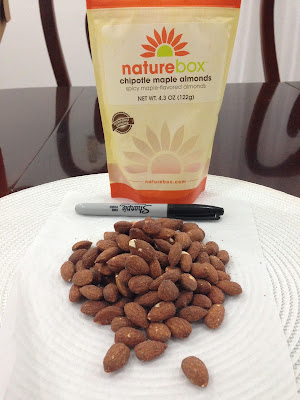 Then came the Chipotle Maple Almonds, 4.3 oz, which are about half gone. They're not as sweet as the honeycomb kernels, but they have a nice maple-spice balance going on. I wouldn't mind a bit stronger on the chipotle, and they kind of made me think of maple bacon. 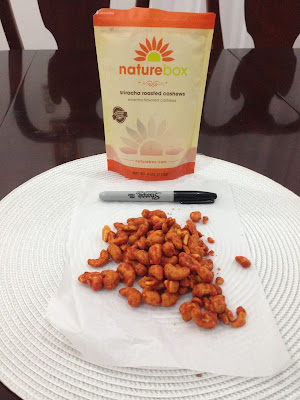 Last but not least, the Sriracha-flavoured Cashews, 4 oz. Now, these were tasty enough but I really would have loved to have them be spicier, though perhaps that's because I like things to be uber spicy. I alternate Sriracha and tabasco on my eggs, so YMMV.

Overall, this box has won me over to Nature Box, with the two 'tricks' of ordering extra snacks at the reasonable $3, and not relying on their suggestion mechanism (which keeps trying to make me get dried fruits that I can get here, or masa chips.) They're expanding to do dips, so I've added tapenade to my next box, which should get in the beginning of next month.