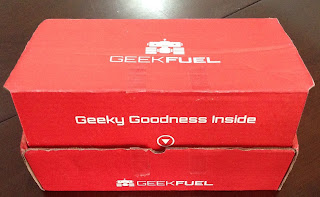 Good morning all, M here with a review of August's Geek Fuel subscription box (links are reference links, just FYI). First, I want to point out that no, you didn't see a review of July's box. This is because, DPO being DPO, I have yet to receive it. Geek Fuel is fabulous about sending tracking numbers so you can stalk your package, and July's box has been in 'Chicago' for well over a month. Thankfully, the Geek Fuel team are understanding folks, and they were kind enough to extend my subscription for another month. So, whomever received my July box, wherever you are, I hope you enjoy it. Mostly. But could you please send me the Civil War issue with the special edition cover when you're done with it?
There is a wee bit of a problem with the images for this month's review, in that I dug into it within seconds of receiving it at work so no nicely staged group pics with PK helping out. My colleague down the hall started laughing when she heard me get the box- apparently I'm a kid at Christmas and the glee was audible. Therefore, bits of the box didn't make it all the way home, notably the Teenage Mutant Ninja Turtles lolly (going to the aforementioned colleague's daughter with the promise that she will be introduced to the original TMNT at the first opportunity) and the AdventureTime Jake POP keychain, which went to another friend's daughter who loves the show. Yes, I do take supporting the next generation of gal geeks very seriously. The keychain, at least, I remembered to get a picture of. It was cute, but since I am apparently the only person on the planet who doesn't watch AdventureTime, it was lost on me. Still, fun, and friend points ;) 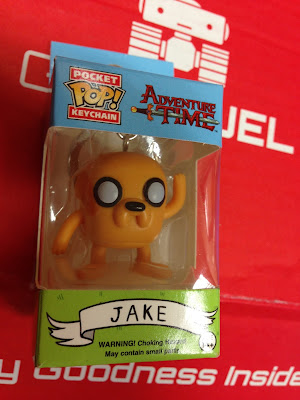 The rest of the box was much more me. First, there were the video game bits. I prefer the Elder Scrolls to the Fallout Series, but I've been known to collect a bottle cap or two in my time in the wasteland, so I appreciate the currency magnet - getting a head start on my post-apocalypse bank account. It's attached to a super-strong magnet, and safely stored on my fridge until the day we need it, which I understand Fallout 4 may give us a few more details about. There was also a Steam code for Aaru's Awakening, which, once I figured out that the B in the code was an 8, turns out to be a very pretty little 2D depiction of the eternal struggle between Dawn, Day, Dusk, and Darkness. I like the artwork, not sure if this will translate to any significant game time, but a nice touch. 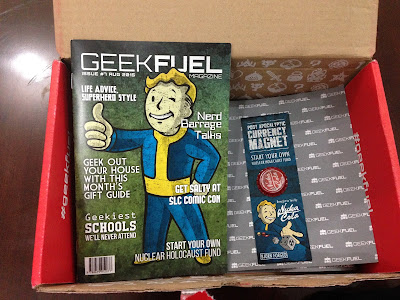 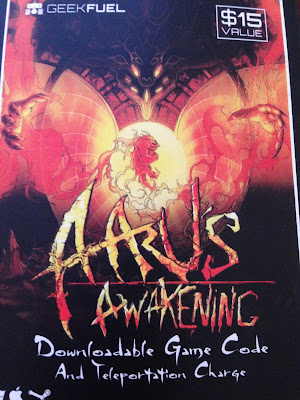 Then it's Marvel time. First out of the box is The World According to Wolverine, which is a neat autobiography/comic/history of the clawed one, with his signature attitude. It has neat 3D features, pictures pasted in, etc., and a pull out poster at the end which I'm tempted to put up at work just to see the reaction. Others who got the box may have received the Spider Man version, and you can also buy ones for Batman, Thor, Joker, Iron Man, and soon Wonder Woman, created by Insight Editions. A fun read. 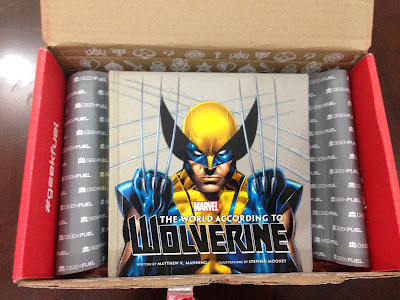 Finally, the T-shirt. Again, I love the t-shirt. Not only does it let me fly my geek flag high, but it helps me identify other geeks at otherwise non-geeky events. For example, at a casual shindig Friday evening, I found 2 people who I hadn't realized were geeky but who got my Deadpool shirt and revealed themselves. We then discussed Ryan Reynolds' acting ability and whether or not the new movie was going to suck as badly as the Wolverine spinoffs did, especially the one in which Deadpool did appear, had maybe three lines, and was subsequently forgotten, as the films themselves should be. My personal stance is that RR is wonderful in any role that requires a) being a smartass and b) being buff. Think Blade Trinity vs. The Proposal. If more is asked of him, we may be doomed, but I think he's a solid fit for Deadpool, and hopefully better than his gig as the Green Lantern. I mean, have you seen the official trailer (NSFW)? Looks like he nailed it. Plus, I love Morena Baccarin (Firefly) and am glad to see Colossus apparently getting more screen time. All of which means, YAY T-shirt!!!! Sadly, I did not get the box with the chimichanga certificate, but don't know how I'd have redeemed it anyway. 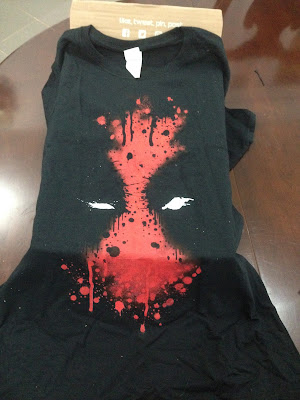 So, in conclusion, this box rocked, again. It nailed it on:
All in all, another solid win from  Geek Fuel, and I'd like to give them another round of applause for handling my lost box so well. Also, to those who say it's a bit random - YES, that's kind of the point, but what I like about the box is that it's timely random - the Deadpool movie is ramping up its media presence, Fallout 4 is in theory coming out November 10 (will believe it when I have it in my hands), etc. Can't wait for next month's (in which maybe there might be some Assassin's Creed goody, given that they just released their first pics of Michael Fassbender for the movie?)

8:36 AM
M
geekfuel, unboxing
Email ThisBlogThis!Share to TwitterShare to Facebook