Whitney recently found something called the Irie Mon Box, which is a box that promises the "quintessential flavors of the Caribbean." 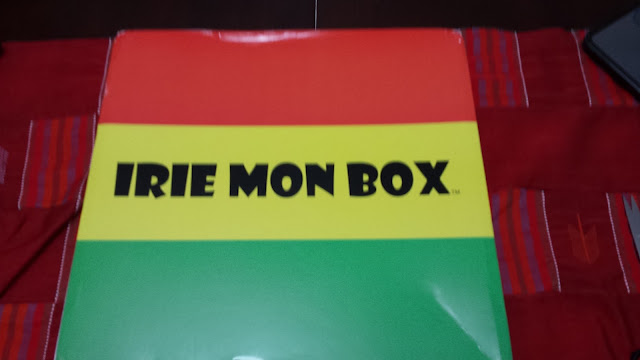 So let me make two confessions.  First, I wasn't sure why she found the box.  Second, I thought for the longest time that it was just a Jamaican box.  And I guess a third confession: this scene from I Love You, Man has been running though my head since the box came.

So the box came, and it was full of eight items.  The box was big and, well, festive.  It included a lot of "food and spice . . . and EVERYTING NICE." 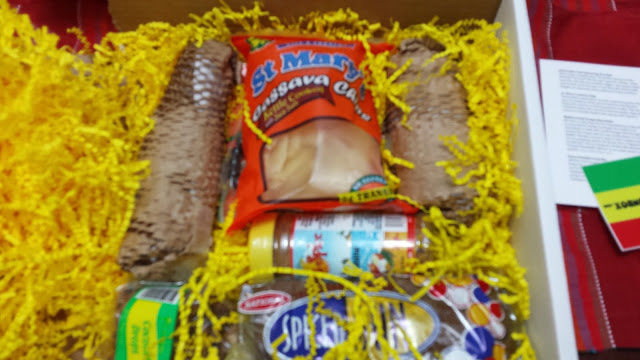 The first product was St. Mary's Cassava chips.  These were kettle cooked with sea salt.  They were a little harder than potato chips and lacked that crisp potato chip feel.  Cassava is also pretty flavorless, but the sea salt flavor came through and made them a decent snack.  LJ stole the bag and almost ate the whole thing before I forced him to go to bed. St. Mary's is made in the Dominican Republican. 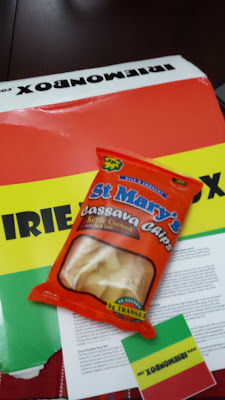 Next, we had this Roots "Line Up" bracelet, which sell for $22 for a set of three on the box's website.  Warming the heart, for each purchase, Irie Mon will donate $3 to Medicine in Action, a medical charity in Jamaica.  The bracelet was sturdy and felt like good quality for the price.  I don't think either of us would wear it on a normal basis or for anything other than themed nights.  Luckily for us, Jamaica and Ghana have the same colors so it will fit in pretty well here, too. 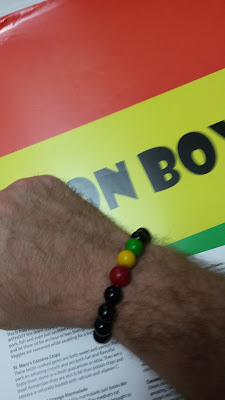 We usually like to buy spices and seasonings when we travel.  The box included a pepper sauce and a jerk seasoning.  The Island Spice Jerk Seasoning apparently has a kick without being too spicy.  Working long days and coming home to a toddler means we haven't had the chance to cook yet, but the spice passed a quick taste test. 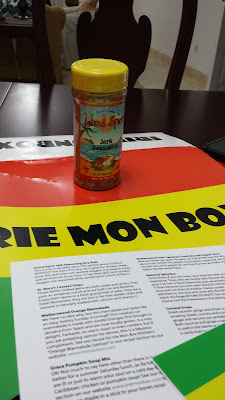 On the other hand, the Walkerswood "Hot" Jamaican Scotch Bonnet Pepper Sauce brings the heat.  The box describes it as "pushing heat and BIG flavor." 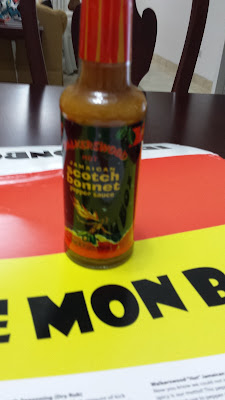 Moving onto dessert, the coconut drops had some strong flavors.  First you get the sweet chocolate taste before it gives to coconut.  You can also taste some mild ginger when eating this candy.  If you don't like coconut, you probably won't be a big fan.  I ate about half the bag pretty quickly so I think they did something right. 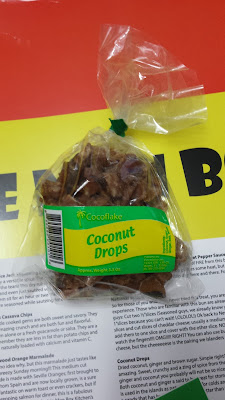 The next item was a National Spiced Bun. From the card, this seems to be fairly ubiquitous in the Caribbean Islands and you should eat with cheddar cheese.  Going to wait for a weekend shopping trip for this one. 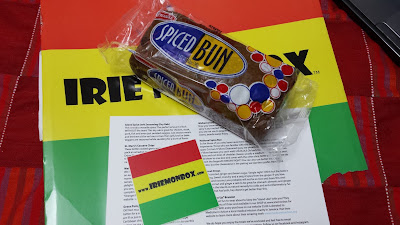 Then, we had Grace Pumpkin Flavored Soup.  I just got over my 3-week long sickness, but I think I'll stash this away until the next one or Thanksgiving.  With a toddler hanging out with other toddlers, one of us is bound to be sick again in a matter of days. 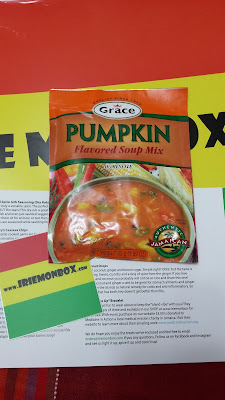 Finally, also from Walkerswood, is an orange marmalade, made from Seville oranges.  I'm not really a marmalade fan, and Whitney is allergic to orange.  Irie Mon suggests spreading on toast, crackers, or salmon. 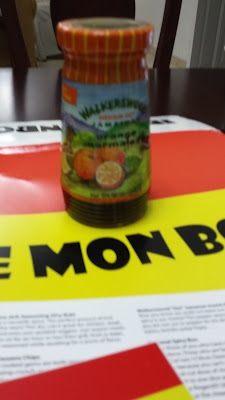 Overall, it was fun to unbox this one.  They included a good variety of items we would purchase to remind us of a trip to the Caribbean, but since we have no plans to travel there anytime soon, this will have to do. 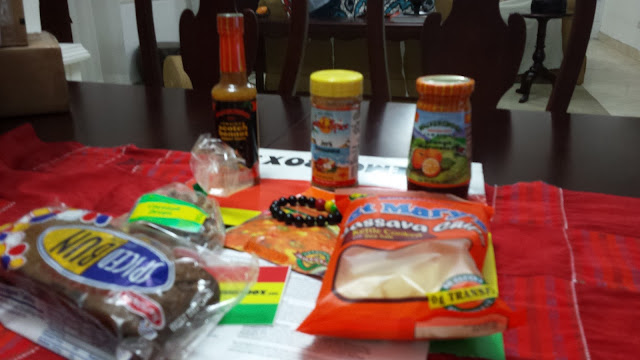 Irie Mon Box costs for $40 for 1 month, $120 for 3 months, and $240 for 6 months.  So no discount for ordering many months.  Their website has a shop where you can buy additional products and six recipes for dishes you could make with the ingredients they send.  Everyone gets $5 off their first box with coupon code: 5dollazoff
I give this Irie Mon Box (out of 10) a 9 on quality, 7 on cost, 8 on appropriate for me, and 8 on fun. 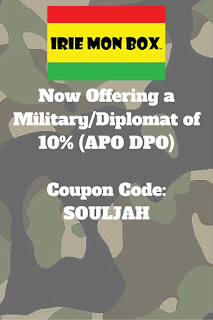 Military Discount: Irie Mon Box also offers a MILITARY/ Diplomat DISCOUNT!  The coupon is for 10% OFF their first subscription and subsequent renewals as long as they ship to APO/DPO/FPO addresses. Coupon Code: SOULJAH

Disclaimer: This box was received for review purposes