It has been fun the last couple of months watching FanMail come into their own as a subscription box. Each month I am impressed at the well thought out and put together themes. For those of you who missed, I recently had a bad experience with a nerd box, and now I am hyper sensitive to not just quantity but quality of what shows up. This month for FanMail it was Super Sheroes. 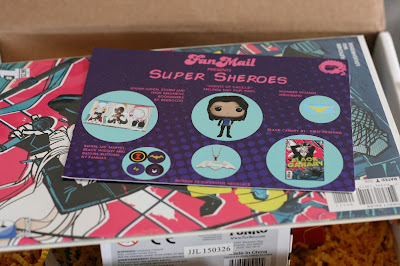 Each month Fanmail features a different theme with a variety of collectibles and other girly geeky goodies that can include comics, t-shirts, jewelry, stationery and more. So far they have favored more handmade items or pieces that you wouldn't see in other boxes, but we haven't seen too many "exclusives" that you would see in larger boxes like NerdBlock or LooteCrate. 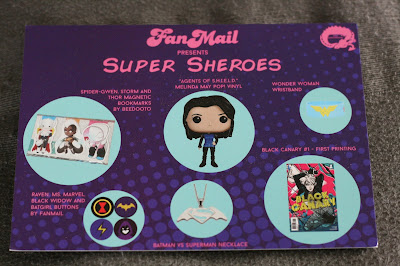 I really did like this month's theme that was focused on strong female super heroes (or at least that was my interpretation). I also like that there was almost a color theme of pink, purple and blue. 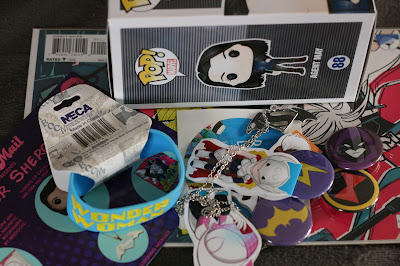 This box included two "big" items. The first was a Black Canary #1 comic book from DC Comics.  I put big in quotes because its only worth about 2.99, but it was awesome to see a full comicbook in a nerd box.  Also, I loved that it was a book I wasn't familiar with. The book is cool and I enjoyed the illustrations. From DC Comics:
"Dinah Lance hits the road! After years as a soldier and vigilante, the LAST place Dinah saw herself is on stage…but she’s quickly learning she’d die to protect the gang of misfits she’s fallen into. And she just might have to – for some reason, the newly rechristened band Black Canary seems to be a magnet for trouble…and Dinah’s not gonna believe it when she finds out the reason why! Martial arts, super-spies, and rock ‘n’ roll combine, from Brenden Fletcher (BATGIRL) and Annie Wu (Hawkeye)!" 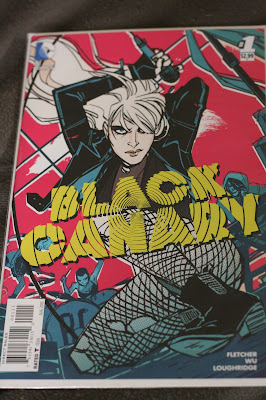 The second "big item" was an Agent May FunkoPop from S.H.I.E.L.D. ($8.29)!  Now I heart FunkoPops and they are quite a trendy collectible.  Now, given the fact I move every two years, I totally unboxed this lady immediately and yes, she's a bobble head. S.H.I.E.L.D. is an Avengers spin off show (and comic) that airs on ABC? (not sure, dont live in the US, here its on VAMP.) 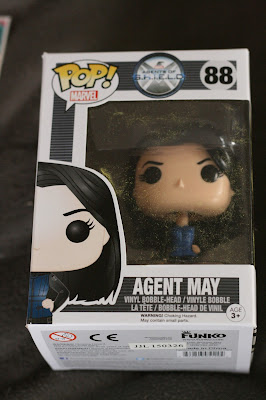 The rest of the items are the smaller types we usually see in FanMail boxes of etsy type items. In fact, the first one is from popular Etsy shop BeeDooTO. They are Marvel girls Spider-Gwen, Storm, and Thor in magnetic bookmark form ($3.50.)  They are cute. 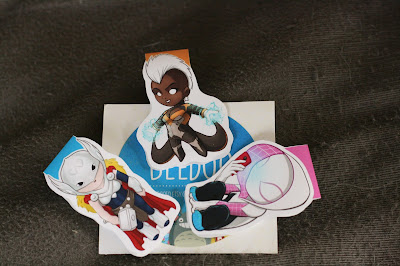 On the "jewelry" front, the box included a plastic wonder woman bracelet. It's cute and I LOVE the colors. I found the actual bracelet on HotTopic's site reduced from $7 to $1, for pricing I will compromise at ($3). Also included was a Batman vs. Superman necklace ($5.70).  The necklace is timely given the upcoming movie and I liked the pendant a lot, however...correct me if I am wrong, not Sheroes? 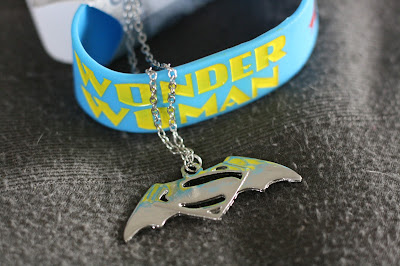 Finally was a Fanmail created set of buttons for Raven, Ms. Marvel, Black Widow, and Batgirl ($1). 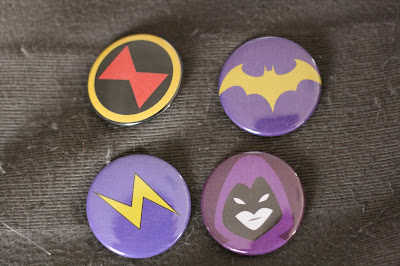