Good afternoon my young padawans. M here again with September's GeekFuel Box. It took a bit of a beating on its way here, and may have lost an item or two in transit :( DPO isn't doing so well these days... 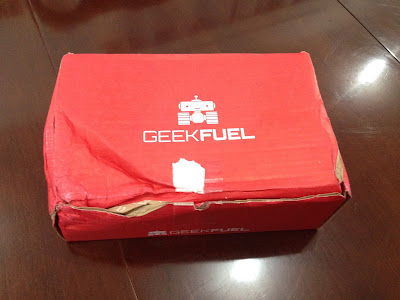 As a reminder, GeekFuel is a monthly surprise subscription box, with one-month, 3-month, 6-month, and year-long subscriptions. I snagged the 6-month one after my first box because I loved it so much. Their customer service has been awesomely responsive (DPO lost one of my boxes. It still hasn't surfaced) and I have yet to be disappointed with a box. Given how persnickety I can be, that's saying something. 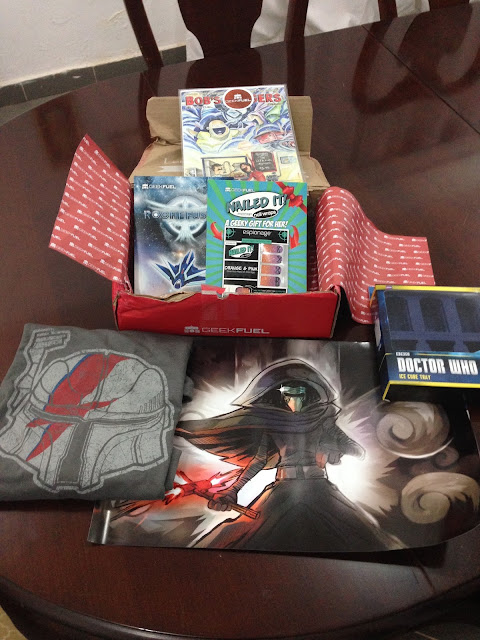 As you may have guessed, the theme was mostly space and I loved it. The high pitched giggly squealing may have given me away. So awesome. Showcased here against dear old love-to-hate-it Drexel, the box contained the following:

The T-shirts remain my favorite part of these boxes. Great for flaunting my geek pride and just darn awesome. This month's David Bowie - Boba Fett number is, as always, full of win.

Once again, GeekFuel totally nailed it for me. I'd give it a 10 on value, with over $60 (not including the T-shirt!) in goodies for $22, a 10 on fun, and a 9 on appropriate for me (only because of the burger comic). The force was clearly strong with this one.